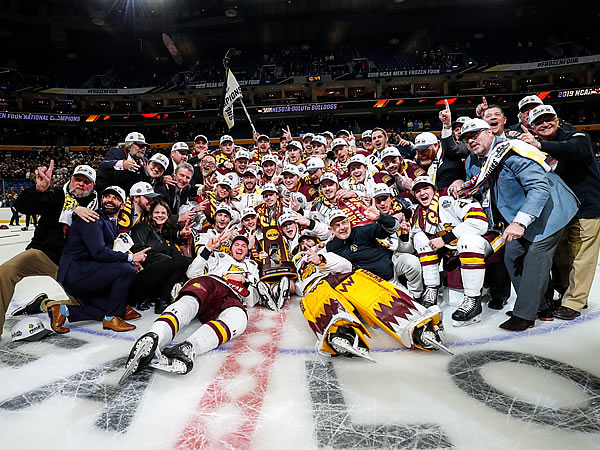 The NCAA crowns its national champion at the culmination of the college hockey season, the Frozen Four, each spring. Held before sellout crowds at NHL arenas, the Frozen Four consists of the two semifinal games and one championship game, played over three days.

Minnesota Duluth claimed the 2019 national championship – its second in a row and the third in school history – with a 3-0 shutout of Massachusetts at Buffalo’s KeyBank Arena. The Bulldogs became the first repeat champions in Division I men’s hockey since Denver in 2004 and ’05.

Over time, the Frozen Four has become more than just the games - it's a weekend long celebration of college hockey. Thousands of fans attend year after year, regardless of the teams involved, creating crowds filled with dozens of different jerseys. On the day between games college hockey celebrates some of its best, with the presentation of the Hobey Baker Award, the Hockey Humanitarian Award, the Mike Richter Award and the AHCA All-America Teams.

Detroit will host the 2020 Frozen Four at Little Caesars Arena. Future sites have been awarded to Pittsburgh (2021) and Boston (2022).